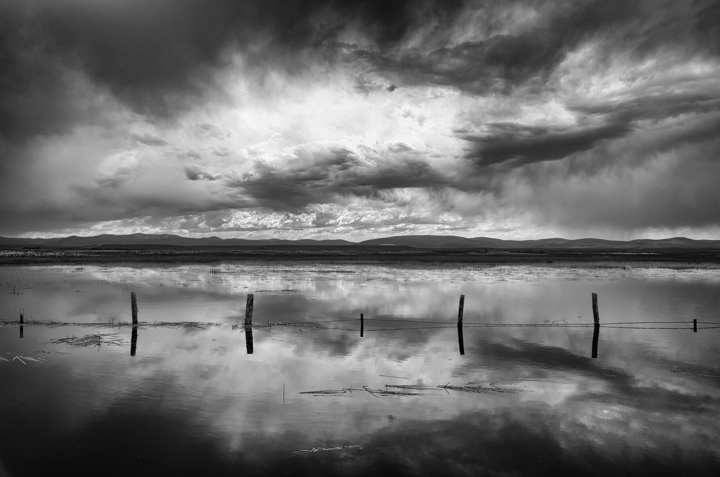 The September show at LeeAnn Brook Fine Art will feature two award-winning Northern California artists who choose the solitude and expanse of sky, land and water as their muse, in two different mediums. 2019 Wild and Scenic Film Festival winner Barbara Michelman will showcase her stunning black and white photography featuring some of the most inspiring and remote regions of the U.S.

Nicholas Coley will feature his large format plein air paintings, rendered with colorful, thick oil paint depicting Aspen groves and hillsides — all done plein air in one sitting on location in Northern California. “Of Land and Sky” will open Friday, September 6 from 5-7 p.m., with an Art Talk by Michelman at 6 p.m. The show will run through the month of September at LeeAnn Brook Fine Art, 231 Broad St., in downtown Nevada City.

Barbara Michelman's 40 year career in the arts has led her from a fast-paced life in Los Angeles, to the solitude of the Sierra Nevada.

“For the past two decades I've been fortunate to travel the West photographing wild places where the world falls away and I lose myself; where time disappears and, in a noisy world, I find the still-point of power, mystery and beauty offered up by living breathing earth,” Michelman writes in her artist statement for the show.

Michelman began her career working in Hollywood in film lighting. As one of the first women in the field, she worked in all the major studios. In 1990 she left Hollywood to photograph the collapse of the Eastern European Bloc nations. After a stint in New Mexico, she moved back to the Bay Area, working freelance and leading photo tours to Europe. She lived in Grass Valley from 2001 to 2006, operating a gallery called Studio 131 which hosted art shows and workshops. Then in 2007 she moved to Montana and worked as a master printer in digital fine art founding and leading the non-profit organization Artists Along the Bitterroot, along with showing her own work.

In 2019 she received the Juror's Award for Photography at the Wild and Scenic Film Festival for her work on the aftermath of California's devastating wildfires. Her more experimental photo montage work was shown in 2018 at UC San Diego in collaboration with the Holocaust Living Workshop. She has exhibited in the United States and Europe and is in public and private collections on both continents. Along with recent exhibitions in the Bay Area, her forthcoming book with writer Charles Finn, “On A Benediction of Wind”, is being published by Chatwin Press and will be out next year.

Nicholas Coley's paintings, reminiscent of that of painter Wolf Kahn, illuminate the canvas with his identifiable palette of soft greens, yellows, purples and oranges. Working with a 2”-4” wide brush, his strokes of oil paint are bold and confident, while sensitive at the same time.

Unlike most plein air painters, he works on large canvases, from 36” on up to 72”, which he brings out into the field, and sets up at the point of inspiration. Dodging wind, insects and ever-changing light, he completes his painting in one sitting, usually consisting of about 6 hours.

Born in Connecticut in 1971 and raised in Muir Beach, California, Coley, studied art at L'Ecole des Beaux Arts in Aix-en-Provence and at the Marchutz school in Le Tholonet, France. He holds a BA in painting from the Evergreen State College in Olympia, Washington, and lived, studied, and painted for a year in a Vietnamese Buddhist Monastery in southwestern France.

A familiar face in the woods at San Francisco's Presidio, Coley's art is often likened to the Impressionists and the The Society of Six. He has successfully shown his work at many Bay Area galleries including the SFMOMA Artists Gallery. He was in group shows at St. Mary's College, Los Gatos Museum, and a solo show last year at the Berkeley Theological Seminary which involved talking about the divine in landscape. He's exhibited and sold his work from San Francisco to Boston for the past 20 years. He just completed his second artist residency in Healdsburg, most recently at Chalkhill Winery. He lives with his wife and three young children in Mill Valley, CA.

LeeAnn Brook Fine Art features Brook's working studio as well as the art of over 20 different artists, open daily from 12-5 p.m., and on Saturdays at 11 a.m. The gallery is located at 231 Broad Street in downtown Nevada City. For more information about the gallery's artists and events, visit www.leeannbrookfineart.com.